That every business should know

In March of 2018 Facebook was hit hard with the exposure of over 87 million users’ data. Consumers’ information was improperly shared with the third-party app developers and political firm Cambridge Analytica. Facebook is in hot water over this leak and CEO Mark Zuckerberg is due to testify before Congress twice during the week of April 9th to address their data privacy issues.

So what does this all mean for advertisers? I have compiled the top 3 changes and how they are expected to affect business owners and Facebook advertisers.

As a direct result of the data breach, Facebook is dissolving Third Party Audience Data Partners.

Never Heard Of This Before?

It’s not uncommon as the source of data is not often highlighted, just provided. Facebook and Third Party Audience Partners first worked together around five years ago as a way for advertisers to target an audience based on its individual behavior. Data for this was collected in a variety of ways such as via loyalty cards from grocery chains. Other information gathered included household income, credit score, and even what car you just bought! Having this data enabled advertisers to use audience segmentation and find the most relevant shoppers for their products or services.

Facebook isn’t cutting off advertisers cold turkey, but be ready! In June advertisers will no longer be able to create new ad sets using any third-party audience. And on October 1st, ads using these audiences will stop running.

What Does It Mean For Advertisers?

A social platform as large as Facebook that has so much information on its users is almost creepy! So the company has a responsibility to protect its users’ data and not exploit it in ways that are misleading. Consumers are becoming more savvy and will not tolerate this sort of unauthorized information sharing.

How Should An Advertiser Adjust?

If your Facebook advertisements rely on purchased-based audiences, you should be researching and building new advertising strategies by reinventing paid campaigns based on audience criteria and by finding similar overlaps.

One way to maintain a consistent campaign through this shift is by testing KPI’s (Key Performance Indicators), identify new opportunities, and capture data. There will be a lot of test-and-learn opportunities to compensate for the educational phase of shifting strategies that hit client goals.

Advertisers should think about exploring alternative platforms like Pinterest, Twitter, and Snapchat. It is imperative to monitor performance over the coming months and evaluate each platform’s targeting capabilities.

So what does this all mean for advertisers? I have compiled the top 3 changes and how they are expected to affect business owners and Facebook advertisers.

After a potential privacy vulnerability was identified, Facebook announced it will stop showing audience reach estimates in any campaign using Custom Audience targeting and customer data.

If you’ve created a Facebook ad in the past, you may have seen one of these images on the right side of your screen in the process of choosing the target audience. 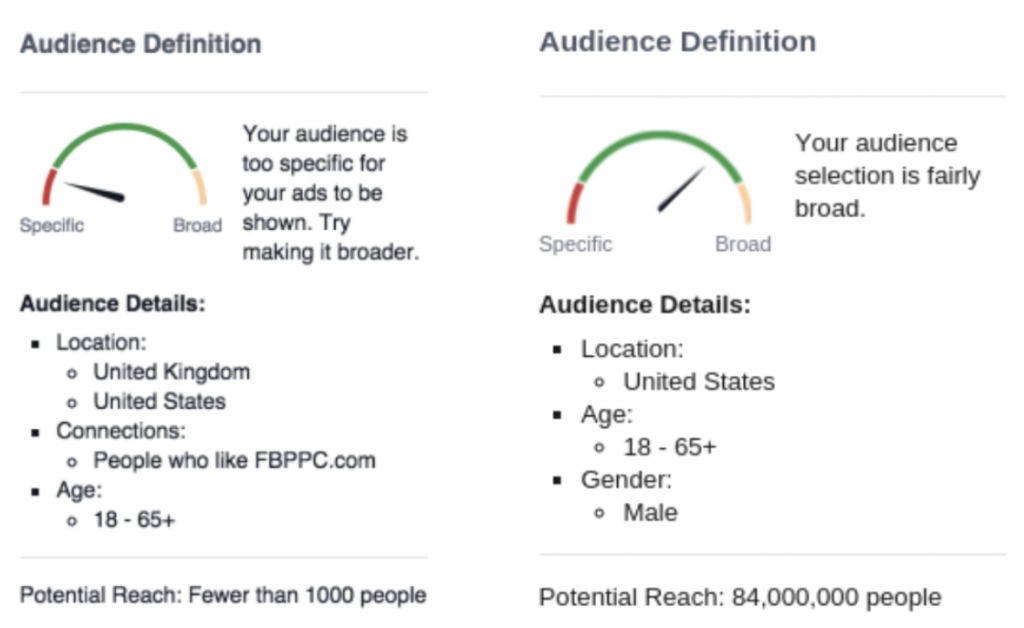 A recent discovery found that this tool has the capability to exploit users data by inferring attributes of an individual when an uploaded Custom Audience is used. These lists often contain emails, physical addresses, and other personally identifiable information. The problem becomes Facebook’s when this information is used in the estimated reach reporting available in the advertising interface.

It turns out there is a rounding threshold in those estimates. Once that’s identified, an advertiser could potentially upload a list of emails right on the rounding threshold and then add one email (or “victim”) to the list. If the reach estimates change when a targeting attitude is selected, the advertiser can infer that person has that attribute. Conversely, if it doesn’t change, then it can be inferred the person does not have that attribute.

Essentially, this process allows advertisers to build comprehensive profiles of individuals without the user ever knowing what was happening. Since this is done entirely in Facebook’s advertising interface, and at no change to the advertiser, Facebook has to make a change.

This feature has been immediately suspended while Facebook is looking into a fix or an alternative feature that eliminates the risk of misappropriation.

How Should An Advertiser Adjust?

Until an alternative or a fix is developed, Potential Reach numbers will not be provided in any campaign set up that uses Custom Audiences. This includes building lookalike audiences from an uploaded list. Advertisers should rely on previously created audiences to ensure they are reaching an appropriate viewers.

The recent 87 million users breach has forced Facebook’s hand to make app data changes. As of the beginning of April 2018, Facebook is reducing the amount of data that apps can request.

What Does This Mean?

From now on, apps on Facebook will be more restricted with reduced ability to access the information of people around the person using the app. For example, apps will no longer be granted permission to information about people who attend an event organized on Facebook bt the person who created the event. Additionally, all third-party apps will require an approval from Facebook, as well as an admin. To ensure tight security, apps can no longer access the member list of any group. Finally, personal information, like names and profile photos that have been attached to any posts or comment have been removed and only approved apps will be able to access them.

What was truly scary (and has now been removed) was the ability to search for users using their phone numbers or email addresses. This is a popular practice with scammers who use information to scrape profiles.

What Does This Mean For Advertisers?

Although this should not have a direct effect on advertisers (unless you have your own app), it is important to know Facebook’s updated and remain aware as to how they may potentially influence the user experience.

Overall, these updates are positives for the two giants, Facebook and Google, by giving them more power over a digital advertising market they already dominate. With less data to target ads on Facebook, marketers will likely work more with Google. Only time will tell what will be the impact on Facebook advertisers and users. May the data be ever
in your favor!

GET YOUR FREE LOCAL SEO REPORT

If you need help with your social media, feel free to reach out to us!